Biscayne Bay is declining before our eyes. Seagrass is dying and fish are floating belly-up in the hot, still summer waters when the Bay becomes an intolerable nutrient soup without much oxygen. We have to restore the Bay by cleaning up the water flowing into it. This will help to save its aquatic life.

Fortunately, help may be around the corner. Miami-Dade County is collaborating with local and state partners to develop a “reasonable assurance plan” (or “RAP”) to restore the Bay. Both the Clean Water Act and State rules allow for localities to develop these stakeholder-driven collaborations that could bring waters back to meeting State standards.

If it’s done right, this RAP could address major drivers of nutrient pollution in Biscayne Bay: pollution from fertilizers, stormwater runoff, sewage overflows, and leaky septic tanks. To do that, it could:

And perhaps most importantly, an approved RAP would unlock lots of money from the State to fund water quality improvement projects and get the Bay back on track.

Ultimately, the plan should propose overarching goals, set measurable metrics, and propose specific actions to achieve these goals. If all goes well, the RAP should result in a nutrient reduction in the Bay and ecological restoration.

Right now, we are waiting to see the draft of the RAP that the County team is finalizing. “Phase 1” of the Plan, taking place in seven municipalities and unincorporated Miami-Dade County in the North Bay, is scheduled to be finalized in September. This area in northern Biscayne Bay corresponds to an area that has seen drastic seagrass die-offs and fish kills.

More phases are planned for subsequent years, and the entire RAP project would eventually cover the whole county by 2026. 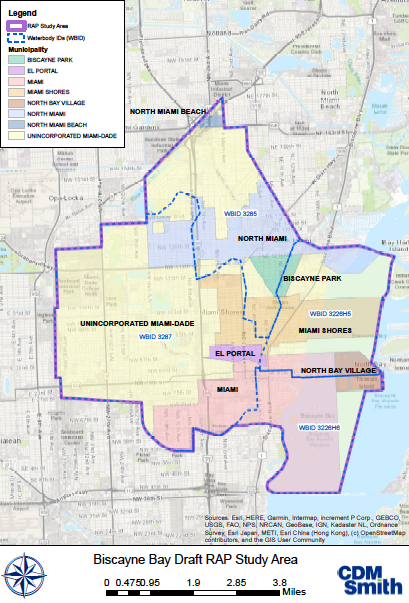 The draft study area of the RAP.

We are appreciative that the County is pursuing the RAP! As this could be a game-changer for Biscayne Bay, Miami Waterkeeper is weighing in on the RAP process as it unfolds to make sure that the final plan is scientifically defensible and enforceable – and one that gets the job done.

The County presented its latest progress update on July 27, 2022, at the Florida Department of Environmental Protection Biscayne Bay Commission meeting. Miami Waterkeeper and Everglades Law Center responded to these updates through a public comment letter. To read our comments, click here.