Protecting Florida’s Coral Reefs from the Impacts of Dredging

In a race to expand U.S. ports to accommodate larger, next-generation shipping vessels, the U.S. Army Corps of Engineers is targeting ports along the eastern seaboard for expansion and dredging. PortMiami was first on the list, where the shipping channel bisects a once-thriving coral reef and critical habitat for threatened elkhorn and staghorn corals. We now know that hundreds and perhaps thousands of ESA-listed (threatened) staghorn corals were impacted by the dredging, and over 250 acres of their critical habitat harmed, some of it permanently (Read more here).

Our work catalyzed NOAA’s rescue of several hundred threatened staghorn corals from habitat impacted by dredging. The rescue took place despite the Army Corps refusing to move the dredge ship to allow the NOAA rescue divers to access many of the imperiled corals (read the emails here).  After refusing to relocate the corals for months, just days before going to court for the injunction hearing, they finally agreed to an over $400,000 coral rescue to relocate the corals to the Lirman lab’s coral nursery at the University of Miami. See our press release to learn more about this important step. This rescue was valued at over $14 million to the public.

We have also succeeded in raising public awareness about the illegal impacts to our reefs, generating dozens of media articles and increasing government oversight of the Corps’ dredging project on local, state and national levels. So far, Miami Dade County's DERM, Florida's DEP, EPA, and NOAA's NMFS have all issued reports and letters showing widespread harm to the coral reef as a result of the dredging. The dredging company's own subcontractors have also issued reports with data demonstrating widespread sediment-related harm to the reefs, despite denying dredging-related impacts in their final reports. Miami Waterkeeper Rachel Silverstein and co-authors reanalyzed this data with robust statistics and published a study showing that over 560,000 corals were killed from dredging and that an area of 25 km was impacted by dredging sediment. The Corps "biologist" on the project, Terri Jordan Sellers, was pled guilty to lying to federal agents about taking money from the environmental contractor on the job.  Finally, we then secured the restoration of 10,000 ESA-listed corals in Miami-Dade.

Despite our victory in forcing the Corps to acknowledge the harm in Miami, the Corps have still failed to incorporate “lessons learned” from PortMiami into dredging plans for Port Everglades, and sent the dredging of Port Everglades to Congress for authorization, despite admitting to erroneous environmental assessments that the Corps now admits underestimates known risk. Port Everglades is located just 30 miles up the coast from PortMiami, and also crosses the Florida reef tract.

To protect the reefs near Port Everglades from the devastation that occurred in Miami, we filed another National Environmental Protection Act and Endangered Species Act lawsuit against the Army Corps. Our co-plaintiffs for Port Everglades include the Center for Biological Diversity, the Dive Equipment Manufacturer's Association, and the Florida Wildlife Federation. We are being represented by Jim Porter (James M Porter, PA) and EarthJustice. Read the complaint here.

In that litigation, MWK alleges that by ignoring the unexpected harm that occurred to the reef at PortMiami, the Corps failed to use “best available science,” in their Port Everglades environmental analyses. In response to MWK’s claims the Corps acknowledged that its current environmental analysis is neither appropriate nor sufficient. However, a new formal evaluation of the dredging plans and environmental considerations is not planned until January 2017 at the earliest. In the meantime, the Corps is moving forward with the multi-million dollar engineering and design of the Port Everglades project. They recently pursued and obtained Congressional authorization for project funding relying on faulty, outdated environmental documents.

However, because of our litigation the Corps has agreed to go back to square one and conduct new environmental studies before starting its planned dredging project to expand Port Everglades. While the Corps does this, Miami Waterkeeper and the other plaintiffs have agreed to put a temporary hold on our federal Endangered Species Act and National Environmental Policy Act lawsuit over the planned dredging. Read the terms of the stay here. Read the press release about this development here.

Apart from these legal actions, we are developing a robust citizen science monitoring plan, in conjunction with University of Miami students, for the reefs surrounding Port Everglades based on NOAA protocols for sediment impact monitoring at PortMiami. We will establish a baseline of reef health prior to the onset of dredging and plan to document reef impacts before, during, and after dredging. 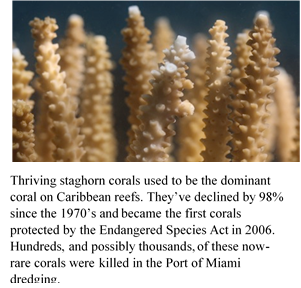 Our work could change the future course of our reef ecosystems and sensitive habitats in South Florida for decades, which are already under severe stress. Caribbean coral reefs have declined over 80% since the 1970’s. While many threats facing corals are inherently global and difficult to address, the threats to corals from these dredging projects can be managed locally and even avoided with proper oversight and protection. A lack of compliance and failure to follow environmental safeguards allowed profound damage to our reefs during Miami’s dredging. Now, damage similar to that in Miami can only be prevented in Port Everglades by engaging a community of concerned citizens and having a prepared outreach, monitoring, and legal advocacy plan in place before dredging commences. While our efforts are focused on South Florida, the implications of our work extend to all other Army Corps port expansion projects across the nation and to international dredging projects as well.

Our goal is to protect the health of South Florida’s wild, diverse, and fragile coral reefs from nearby port expansion projects. 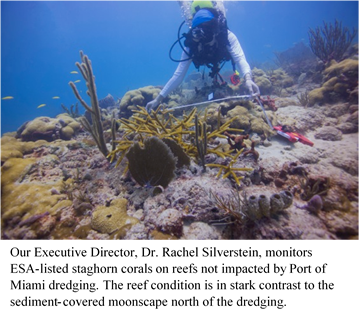 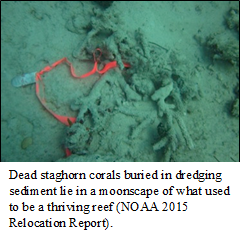 We will continue our advocacy efforts to protect corals adjacent to PortMiami and Port Everglades throughout the life of the projects. We will engage local communities, dive groups, citizen science programs, and schools, raising awareness, generating public comments in favor of coral protection, and encouraging civic action.

Still want to read more about the PortMiami litigation?

Here’s a detailed, chronological Statement of Facts recently filed with the Court in the case and some exhibits showing everything that occurred during the dredging.