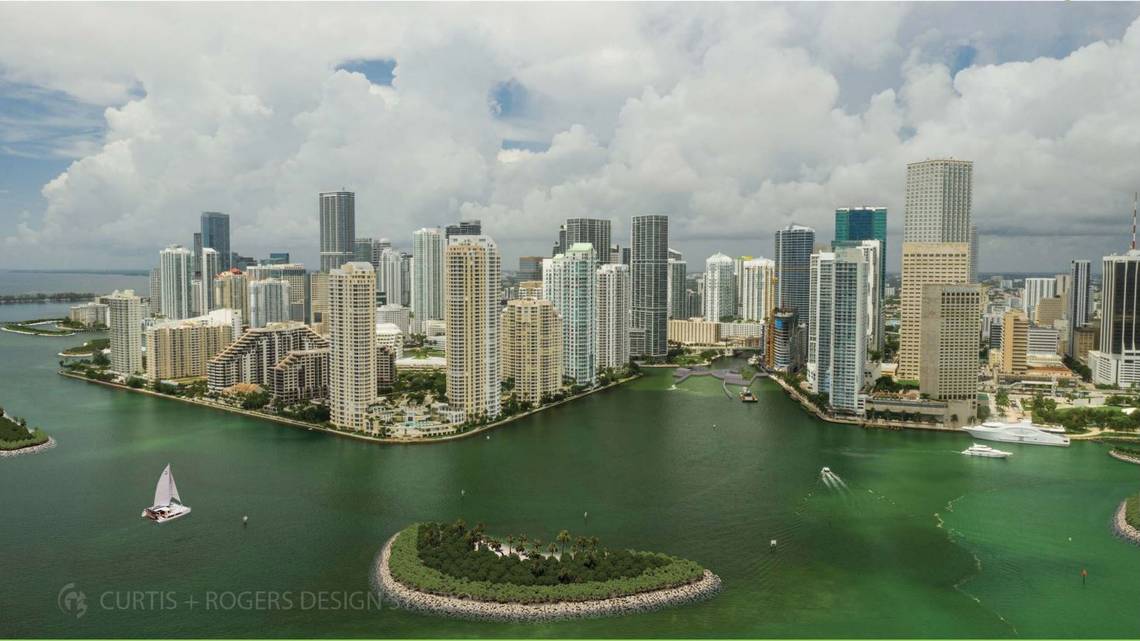 A rendering depicting what the Army Corps of Engineers’ proposed flood gate designed to protect downtown Miami from storm-surge flooding might look like alongside a man-made island. Curtis + Rogers Design Studio and the Miami DDA

Miami-Dade has another shot at a government-funded solution to its storm surge flooding problem. The federal government has agreed to take another look at its $6 billion proposal to address Miami-Dade’s risk of hurricane-driven flooding after the county rejected the plan last year.

The original plan involved elevating thousands of homes, flood-proofing important buildings like fire stations and hospitals and even planting more mangroves in South Dade. Miami-Dade residents and politicians were mostly on board, especially with the promise of the feds footing most of the bill.

But the county ultimately rejected it because of one crucial element — a proposed wall along the coast of Miami-Dade that topped 20 feet at some places and connected to a series of floodgates at the mouth of Miami rivers and canals.

The uproar over a view-blocking, Biscayne Bay damaging wall along the coast was intense. Miami’s Downtown Development Agency even commissioned renderings of the wall covered in graffiti and trash. Developers and politicians suggested a prettier, more nature-based approach instead, like mangroves or man-made islands, but ultimately they couldn’t get the Corps on board.

A rendering depicting what the Army Corps of Engineers’ proposed 10-foot high walls designed to protect downtown Miami from storm-surge flooding might look like at Brickell Bay Drive. Curtis + Rogers Design Studio and the Miami DDA

Now, the U.S. Army Corps of Engineers has agreed to reconsider that part of the plan, officially known as the Back Bay Coastal Storm Risk Management Study. And it will pay for the new study itself, at no cost to the county.

Miami-Dade Mayor Daniella Levine Cava’s administration has been pushing the Corps to consider a more nature-based approach to coastal protection for years, and she called the recent decision “a great accomplishment” for the county.

“The fact is that we were very persistent and persuasive and we also had public input that was very clear on the idea that the original plan of all hard or gray infrastructure would not be acceptable,” she said.

This time, she said, the Corps agreed to hold more meetings with the public and accept more comments on the proposed strategy. The study is focused specifically on the “structural” element of the plan, which used to be the wall and series of flood gates. The other elements, including home elevations and flood-proofing, will remain the same.

In an Aug. 3 letter to Levine Cava, Assistant Secretary of the Army Michael Connor called the study “an important and complex project” that “requires a large collaborative effort.”

He budgeted an additional $8.2 million and 60 months for the study, double the original $3 million, 3-year study. However, Levine Cava said the Corps expects to finish by 2024 and score government funding to start work as soon as 2025. 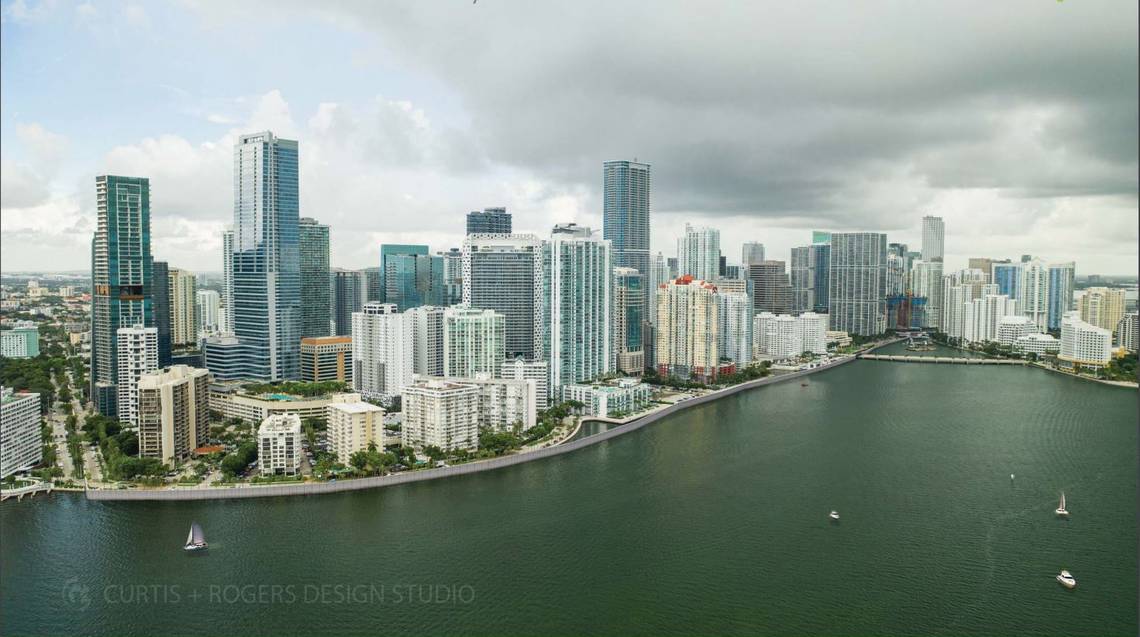 A rendering depicting what the Army Corps of Engineers’ proposed 10-foot high walls designed to protect downtown Miami from storm-surge flooding might look like. Curtis + Rogers Design Studio and the Miami DDA

Part of the agreement includes a review at the one-year point by Levine Cava to ensure the Corps is on track for a solution that Miami-Dade residents will like.

Irela Bague, the county’s chief bay officer, said the Corps got the message “loud and clear” that there was too much steel and concrete and not enough mangroves and sand in the original plan.

“I’ve never seen the Corps pivot like this for any local government in my 20+ career dealing with them,” she said. “It shows how important our region is.”

Jim Murley, the county’s chief resilience officer, said the new study will also give the Corps the chance to come up with a plan that works alongside some of the other major Army Corps projects ongoing in the region. They include a restudy of how often the government should add sand to Miami-Dade’s beaches, a restudy of South Florida’s aging drainage system of canals and pumps and a fresh look at how Everglades restoration affects Biscayne Bay.

“They all relate to moving water or dealing with storms and that’s the essence of living in Miami, it’s understanding that balance,” Murley said.