This article was originally published on July 22, 2022, by the Florida Department of Environmental Protection. Read original. 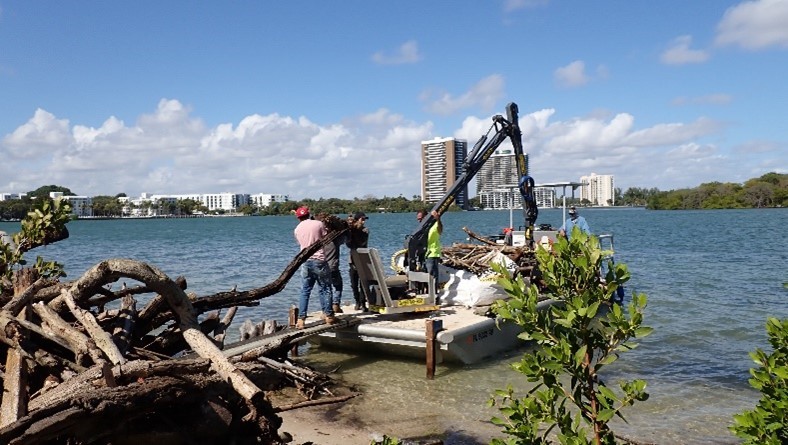 TALLAHASSEE, Fla. – The Florida Department of Environmental Protection (DEP) is celebrating the removal of 56 tons of marine debris deposited by Hurricane Irma from 13 spoil islands in Biscayne Bay.

DEP’s Biscayne Bay Aquatic Preserves led the project after receiving a $100,000 grant from the National Oceanic and Atmospheric Administration's (NOAA) Marine Debris Program. This grant, provided by the Bipartisan Budget Act of 2018, supported coastal recovery efforts involving marine debris assessment, removal and disposal associated with Hurricane Irma. The Category 5 storm made landfall in Florida on Sept. 10, 2017, and caused more than $50 billion in damage in the United States.

DEP, along with partners from NOAA, Miami-Dade County, the cities of Miami and North Miami, and AshBritt Environmental, focused on marine debris, starting at the shoreline and extending up to 100 feet inland. At the conclusion of the 46-day endeavor, a total of 45 island acres were restored and 111,944 pounds – just under 56 tons – of marine debris was removed. The debris included dock and decking lumber, tires, fishing gear, plastics and aluminum cans. Such debris can affect water quality, thwart vegetative growth and harm wildlife.

“This was an excellent example of what can happen when federal, state, local and private partners work together toward a common purpose,” said Alex Reed, director of DEP's Office of Resilience and Coastal Protection. “Using collaborative local planning processes like the Biscayne Bay Commission, the state continues to move forward on restoration projects in the bay.”

Biscayne Bay’s spoil islands were last restored and enhanced in the 1990s and early 2000s in a project led by the Miami-Dade County Department of Environmental Resource Management, with funding support from the state of Florida. Since 2015, the Adopt-an-Island Program has built on those restoration efforts through the removal of marine debris.

Future restoration projects include the removal of submerged debris and derelict vessels to further restore these important islands and surrounding marine ecosystems.

The Biscayne Bay Commission identified marine debris and exotic vegetation removal as a priority for response agencies in order to protect the bay and wildlife and provide public recreational opportunities. The commission has called upon federal, state and regional stakeholders, such as DEP, to take an active role in preventive and cleanup measures.

Why should you stop frolicking in Miami-Dade floodwater? It’s probably full of poop