As sea levels rise, high-tide flooding has worsened in many coastal cities on the east coast like Miami. As these flood waters recede, they carry excess toxic pollutants and nutrients into rivers, bays, lakes, and coastal waters.

According to NOAA, from the year 2000 to 2017, high tide flooding frequency along the southeastern coast of the United States rose 160%. With sea levels expected to rise another 3 feet to 6 feet by 2100 due to melting ice sheets and glaciers, scientists warn that much worse is to come. NOAA projects that as many as 85 days of high tide flooding will occur annually along the southeastern United Stated coast by 2050. 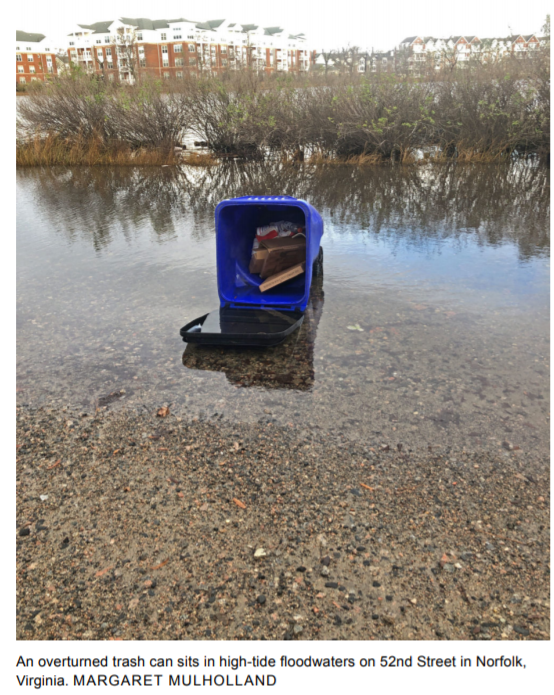 Margaret Mulholland, a biological oceanographer at Old Dominion University, has focused her research on the potential impacts of toxic pollutants and nutrients from high tide flooding in the Chesapeake Bay area. Her analysis of water samples indicates that one morning of high tide flooding along the Lafayette River in Norfolk poured nearly the entire U.S. EPA allocation for nitrogen runoff (1,941 pounds) into the Chesapeake Bay. Mulholland's research project uses tidal flooding models to calculate the amount of water on land during king high tide sampling and subsequent nutrient load into the Bay. Mulholland noticed other pollutants such as oil, gasoline, and trace metals are also washing into waterways, as evidenced by petroleum sheens visible on the water during high tide flooding. It is visible, but they do not currently have the analytical ability to study these particular pollutants.

Global sea levels have risen 8 inches in the last century, 1.3 inches per decade, and "sunny day" and "blue sky" flooding is on the rise. In Miami, sunny day flooding is becoming increasingly severe, accelerating to nearly 20 days a year. Miami Waterkeeper student, Casey Dresbach, is wrapping up an Honor's thesis research project related to toxic contamination and impacts from sea level rise in South Florida. In partnership with the South Florida Regional Planning Council and the Treasure Coast Regional Planning Council, Casey developed a GIS interface for identifying toxic hot spots that are most vulnerable to sea level rise and high tide flooding in our region. The purpose of Casey's study was to evaluate which brownfield sites in Miami were most susceptible to sea level rise and flooding impacts, cross-referencing these sites with socioeconomic data to determine community vulnerability to toxic contamination. This research will inform clean up efforts through the EPA Brownfield Coalition Assessment Grant program.