What's up with the algae bloom that led to Florida's state of emergency? 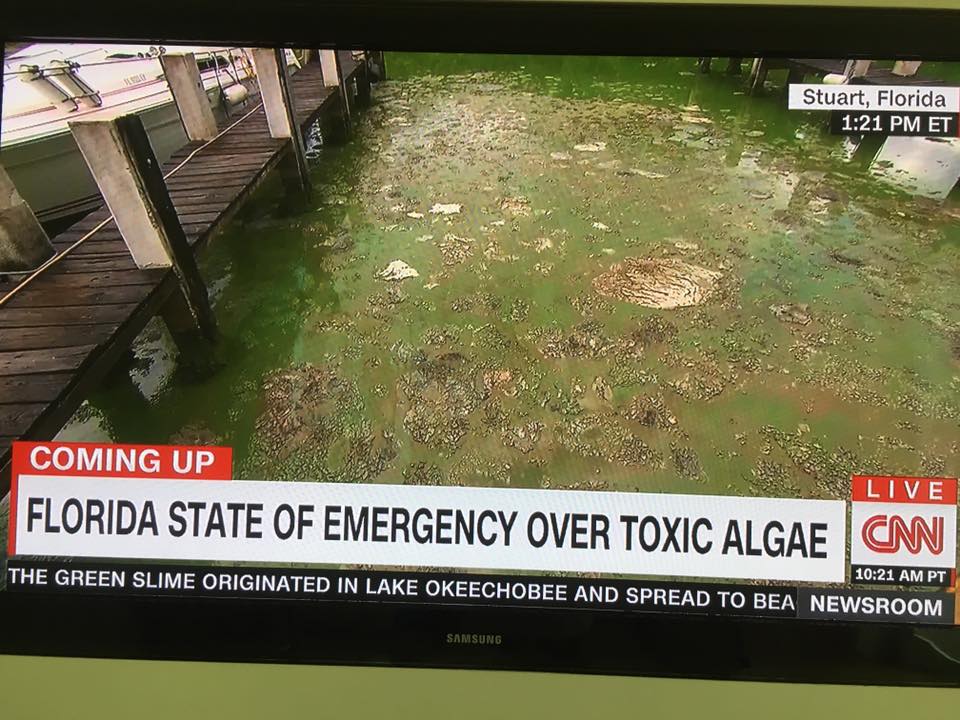 The last few weeks, we’ve seen some of the worst algae blooms ever recorded in southeastern Florida. It’s not a natural event; it’s entirely manmade, stemming from overly-engineered waterways and industrial pollution.

So, what’s the deal with the algae blooms that led to a state of emergency in Florida?

Lake Okeechobee is shaped like a saucer, and is made to overflow with heavy rains, which, historically, would feed water south into the Everglades. With the draining and reegineering of the Everglades, however, water can no longer flow south. Water now flows through artificial waterways constructed by the Army Corps east through the St. Lucie River and west through the Caloosahatchee River. The result is that the Everglades is starving for freshwater, while our fragile and productive coastal estuaries are inundated with too-much polluted water being pumped out of Lake Okeechobee.

Our estuaries and surrounding communities continue to suffer because the water in Lake O has been polluted by years of fertilizer-filled water from agriculture. Too-much fertilizer leads to the production of algae blooms (green, smelly, and dangerous proliferation of algae in the water). We urgently need to move forward with plans to store, treat, and move water south of Lake O, as originally envisioned in the Comprehensive Everglades Restoration Plan.  The purchase of land in the Everglades Agricultural Area, located just south of Lake O, is essential to flow water south to Everglades National Park and Florida Bay and to relieve the damaging discharges to the estuaries. 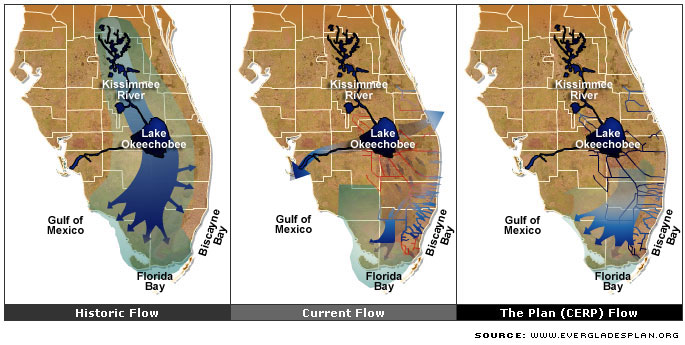 Land in the Everglades Agricultural Area south of Lake O is owned almost entirely by two companies: U.S. Sugar and Florida Crystals.  In 2008, then-Governor Charlie Crist negotiated a deal to allow the state to purchase lands needed from U.S. Sugar. However in 2015, members of the South Florida Water Management District Governing Board, all appointed by Governor Rick Scott, opted not to execute the contract for 26,000 acres. The purchase would have been a huge step forward for Everglades restoration and would have helped to reduce the discharges that are currently devastating our coastal estuaries. (That’s why you see thousands of people spelling out  “Buy the Land") 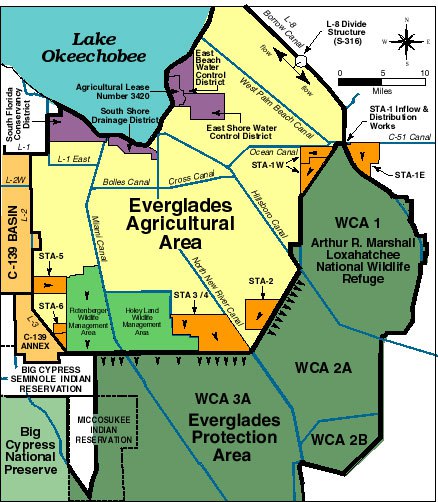 In 2014, 74% of Floridians voted to pass Amendment 1, which gave the state hundreds of millions of dollars specifically to buy land for conservation. Great, this solves the problem, right? Unfortunately not. Florida legislators failed to properly invest these funds in consevation as intended by Amendment 1 (a lawsuit from fellow Waterkeepers on the St. John’s over the misappropriation of these funds can be read about here). In 2016, lawmakers passed the Legacy Florida bill, requiring a specific amount of Amendment 1 funds be spent on Everglades restoration annually and prioritizing restoration projects that relieve damaging discharges to the estuaries. Unfortunately, the South Florida Water Management District has failed to prioritize projects that substantially address the current water crisis.

While these discharges are happening 100 miles north of Miami, we are also now seeing algae blooms in Biscayne Bay for the first time for different reasons but with the same risk. Here in Miami, we are suffering from local pollution sources such as sewage spills, septic tanks, and fertilizers that have long lasting impacts. That’s why we’re leading efforts to stop pollution and prevent algae blooms into Biscayne Bay in coordination with Florida Sea Grant and the University of Miami via the NOAA Habitat Focus Area grant. 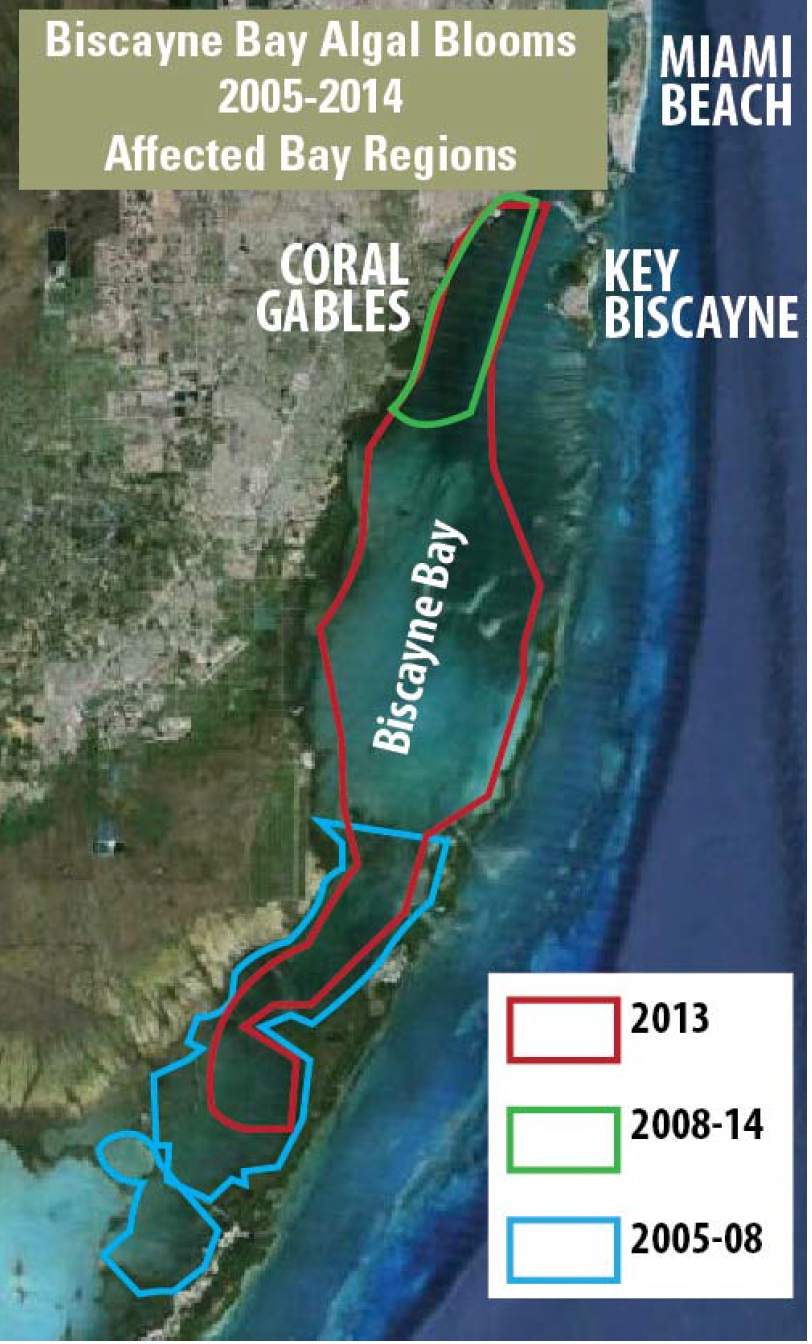 Back in Biscayne Bay, large areas are were closed this week for swimming due to pollution…

There was a widespread swimming advisory in Biscayne Bay, right here in our backyard. We have a major issue with chronic sewage spills and antiquated sewage infrastructure, leading to the pollution of Biscayne Bay. Miami-Dade County and the U.S. Environmental Protection Agency entered into a $1.3 billion deal to retrofit local sewage infrastructure in 2014, but it’s still in progress, and in the meantime, spills are common. These spills not only lead to algae blooms, but also significant health risks. This particular spill came from an old pipe by the American Airlines Arena.  The Miami Herald reported today that “a swimming advisory is now in place over a three-square mile area from the Rickenbacker Causeway to just after the Venetian Causeway, health officials announced Tuesday. The area includes Hobie Beach, Marine Stadium and the water near MAST Academy and Jungle Island.”

What can you do to prevent algae blooms and spills?