Almost everyone who has lived in, or even visited, Florida last year will remember the pictures, videos, or in-person sites of beaches and marinas covered in dead marine life. This event was often blamed on red tide. However, there is another culprit involved: cyanobacteria, which is commonly referred to as blue-green algae because of its color.

Harmful Algal Blooms (HABs), especially blooms of cyanobacteria, have been increasing in frequency, duration, and severity in the United States, particularly in Florida in recent years. They have been widely considered to be one of the greatest threats to water quality and ecosystems in inland and coastal communities (Brooks et al. 2016). Many major Florida watersheds including the St. Johns River, Lake Okeechobee, Harris Chain of Lakes, Caloosahatchee River, and St. Lucie River have been significantly impacted by this type of algae bloom (FDEP 2004). 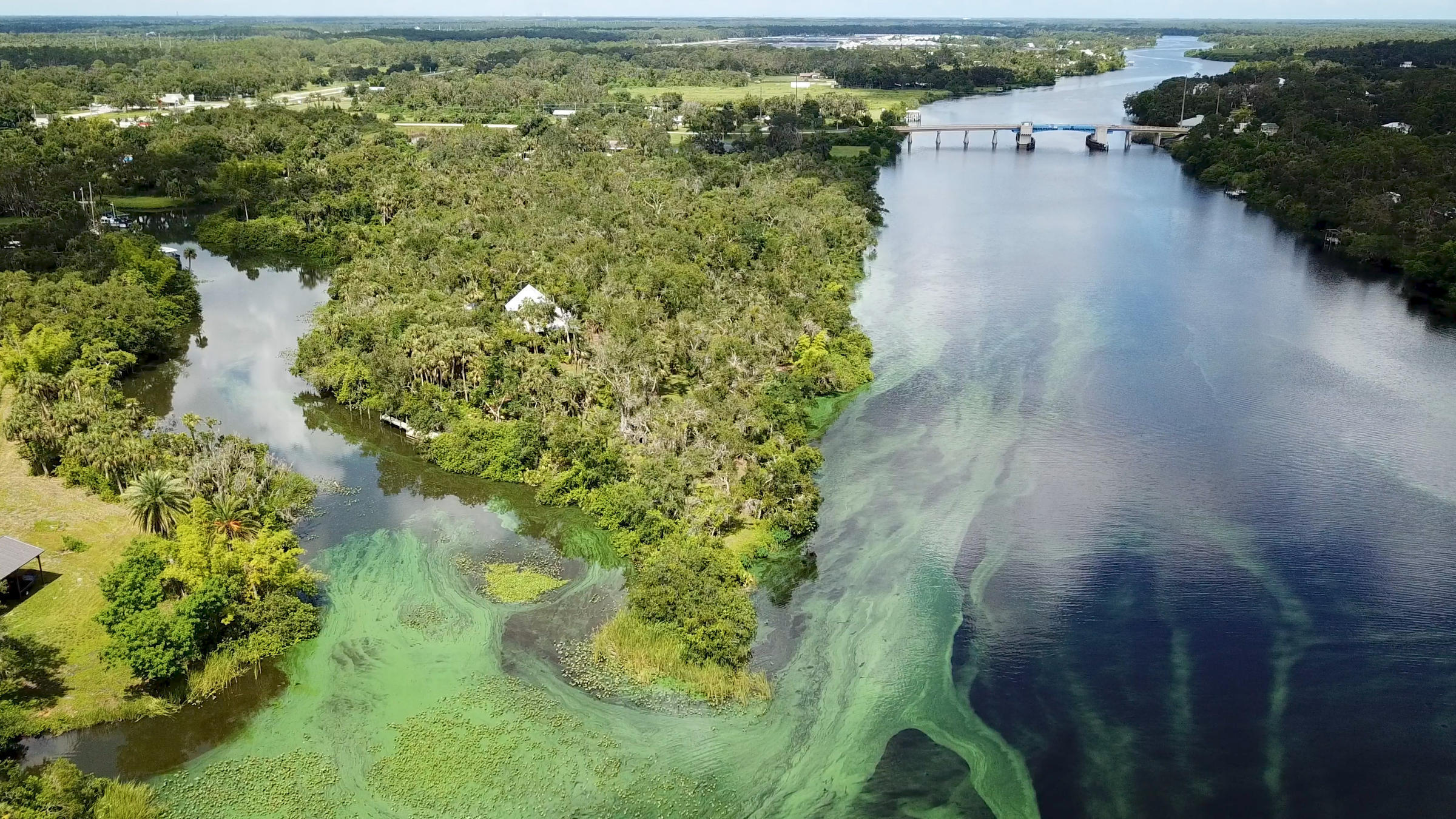 Why are the blooms dangerous?

Cyanobacteria blooms are typically associated with high nutrient levels in a body of water. Cyanobacteria, like many other species, require oxygen to survive. The bacteria's oxygen consumption can lead to a condition of low oxygen levels in the water called hypoxia. These areas of low oxygen, also known as Dead Zones, can lead to mortality of fish and benthic organisms due to lack of available dissolved oxygen in the water.

Additionally, the blockage of sunlight by the algae can affect photosynthesizing organisms like phytoplankton and macrophytes, which can lead to a disruption of food webs and biological community structure and function (Lopez et al. 2008, Havens 2008).

Cyanobacteria also produce toxins, two being microcystin and cylindrospermopsin, which can cause sub-lethal and lethal toxic effects to fish, zooplankton, aquatic macroinvertebrates, wading birds, and other aquatic vertebrates. Not only that, but these toxins can affect higher trophic levels through bioaccumulation as species make their way through the food chain.

Where do these blooms come from?

Although there are naturally occurring photosynthetic bacteria found in both freshwater and marine ecosystems, it has been observed that cyanobacteria blooms positively correlate to total nitrogen and phosphorus in lakes, rivers, and coastal ecosystems in many regions (Pearl 1988). Other variables that can promote blooms and toxin production include water temperature, transparency, and movement; heightened carbon dioxide levels; elevated/more basic pH; excess iron and dissolved organic matter; plentiful direct sunlight; and zooplankton grazing dynamics.

During a HAB of this blue-green algae, the cyanotoxin concentration may rapidly increase and may become elevated before a visible bloom is actually observed. The toxin concentrations in surface waters may actually persist after the bloom fades, so exposure, both to marine life and humans, may be occurring before and after visible signs of the algae’s presence.

What can be done to address this problem?

In the late 1990s, cyanobacteria were considered by the first Harmful Algal Bloom Task Force, and in 2000 the HAB Task Force determined several goals for addressing this problem. These goals included surveys, epidemiology studies, educational materials, and workshops to discuss detection methods. However, this task force was defunded in 2001 and since then Florida has not adopted any water quality criteria specific to cyanobacteria to meaningfully address this issue.

The Environmental Protection Agency (EPA) has determined that the recent 2019 guidelines issued for recreational exposure to the toxins produced by cyanobacteria could be used as guidance to states for both swimming advisories and as new water quality criteria values. If adopted under 303(c) of the Clean Water Act, the standards could be used for Clean Water Act purposes.

Ideally, because of the increased frequency, duration, and severity of blooms in Florida, lower threshold values would be more appropriate because it would trigger swim advisories and would call for remediation action sooner as opposed to waiting for the higher threshold value to be reached. We, along with Waterkeepers Florida, have requested FDEP to initiate the rulemaking process and implement water quality standards for cyanobacteria and the associated toxins at the aforementioned 2016 guideline threshold values. This will ensure swimming advisories and water quality remediation actions take place in an appropriate timeframe.

FDEP has also recently launched a Blue-Green Algae Task Force. The Task Force meetings are open to the public and the next discussion will take place on June 12, 2019. Click here to learn more.