Paola is an incoming Senior at Barry University studying Political Science. She is a Barry Service Corps Fellow and a member of the Ecological Sustainability Team. Paola researched marine debris as part of her summer project as a Miami Waterkeeper Intern.

The human impact on our environment is clear, especially in the area of waste disposal. The United States, with a population of 325 million people, makes up 5% of the world’s 7.5 billion population. However, the U.S. produces about 30% of the world’s waste (Zavodska, 2017). Each American discards an average of more than 1,650 pounds of garbage every year, or approximately 4.6 pounds per person each day, nearly double the 1960 average of 2.7 pounds per day (Toxic Action Center, n.d.). According to the United Nations and other agencies, worldwide waste production is more than 1-1.3 billion tons per year (Malone, 2006). It is evident waste disposal is a major issue at a global level, and the American psychology of materialism and culture of consumerism only exacerbates the problem. Through improvement of general and electronic waste recycling initiatives, resource mitigation, toxic reclamation, and landfill reduction, we can preserve the reciprocal relationship we have with our environment.

A major part of the issue regarding global waste production is the fact that we live in what some have coined as the Anthropocene. The Anthropocene is a proposed epoch during which humans have immensely influenced the environment and climate. Pope Francis alludes to the global waste issue in his encyclical, Laudato Si. He says, “each year hundreds of millions of tons of waste are generated, much of it non-biodegradable, highly toxic and radioactive, from homes and businesses, from construction and demolition sites, from clinical, electronic and industrial sources.” (Pope Francis, 2015, p.16). Moreover, he mentions that we live in an area of throwaway consumerism quickly reducing things to rubbish and causing excessive waste production (Pope Francis, 2015, p.17). Most people in the U.S. will buy things and throw them away in six months, which reiterates the materialistic mindset of American people (Zavodska, 2017). On the other hand, the waste streams grow in volume and toxicity because there are few market incentives to prioritize recycling, reusing, or substituting less toxic alternatives in product ingredients (Toxic Actions Center, n.d.).

Throughout the world, the majority of trash ends up in landfills, but many may not realize a substantial amount of our trash pollutes our ocean, impacting wildlife and its ecosystems. According to a thesis written by University of Miami student, Marolly Watson, sources of marine debris can be land-based or sea-based. Land-based sources include debris that enters the ocean by being washed off the land, blown by winds, or intentionally brought offshore and thrown away. This type of pollution contributes to 80% of marine debris. Such sources may come from beachgoers, marina and port activities, manufacturers, transporters, waste disposal, processing facilities, and general public littering. Sea-based sources of marine debris include ship cargo, supplies, waste, equipment, and fishing gear (Watson, p.4, 2012).

Plastic is a major contributor to marine debris, seen on shorelines and floating in oceans. In fact, there are 5.25 trillion pieces of plastic debris in the ocean around the world (Parker, 2015). Unfortunately, it is not biodegradable and as plastic ages, the sun’s light and heat break it into smaller, more toxic pieces. Most of the floating trash consists of these tiny pieces of plastic, many so small they cannot be seen with the naked eye. Birds and sea animals often consume these micro-plastics, mistaking them for fish eggs, or other food, which can lead to malnutrition, starvation and death. 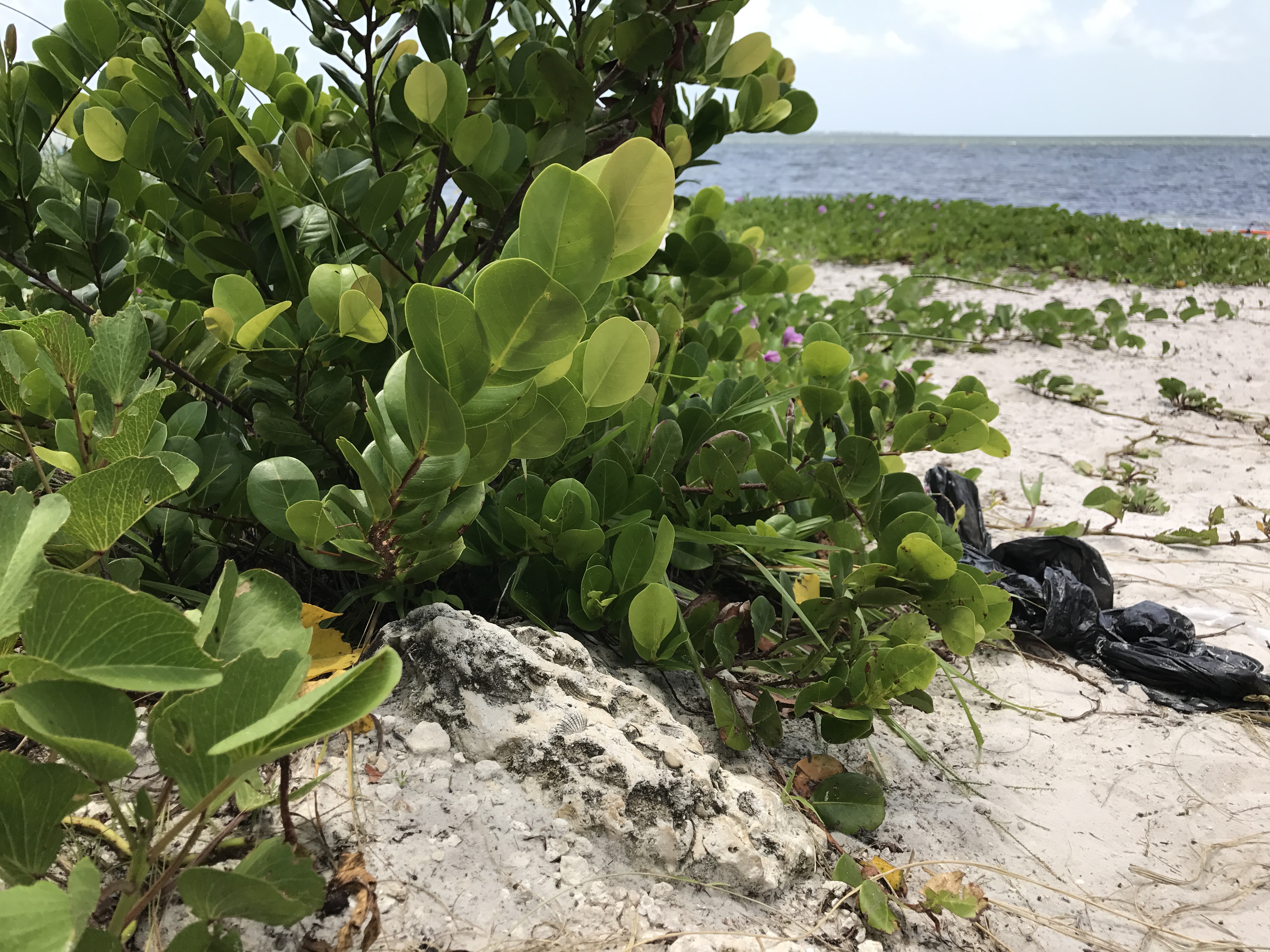 Similarly, one of the most common threats to our wildlife results when animals become entangled in pieces of debris such as fishing gear, balloon string, six-pack rings, and rope, resulting in injury, illness, suffocation, starvation and even death (Benson, 2015). South Florida’s sensitive coral reefs are especially vulnerable to discarded fishing gear, damaging or potentially killing marine organisms and their habitats. It is important to keep our waters clean in South Florida since our region is home to species of high commercial and ecological importance, many which are threatened or endangered; damage to such sensitive habitats is a critical threat to overall marine ecosystem health (Watson, p. 4-5, 2012). 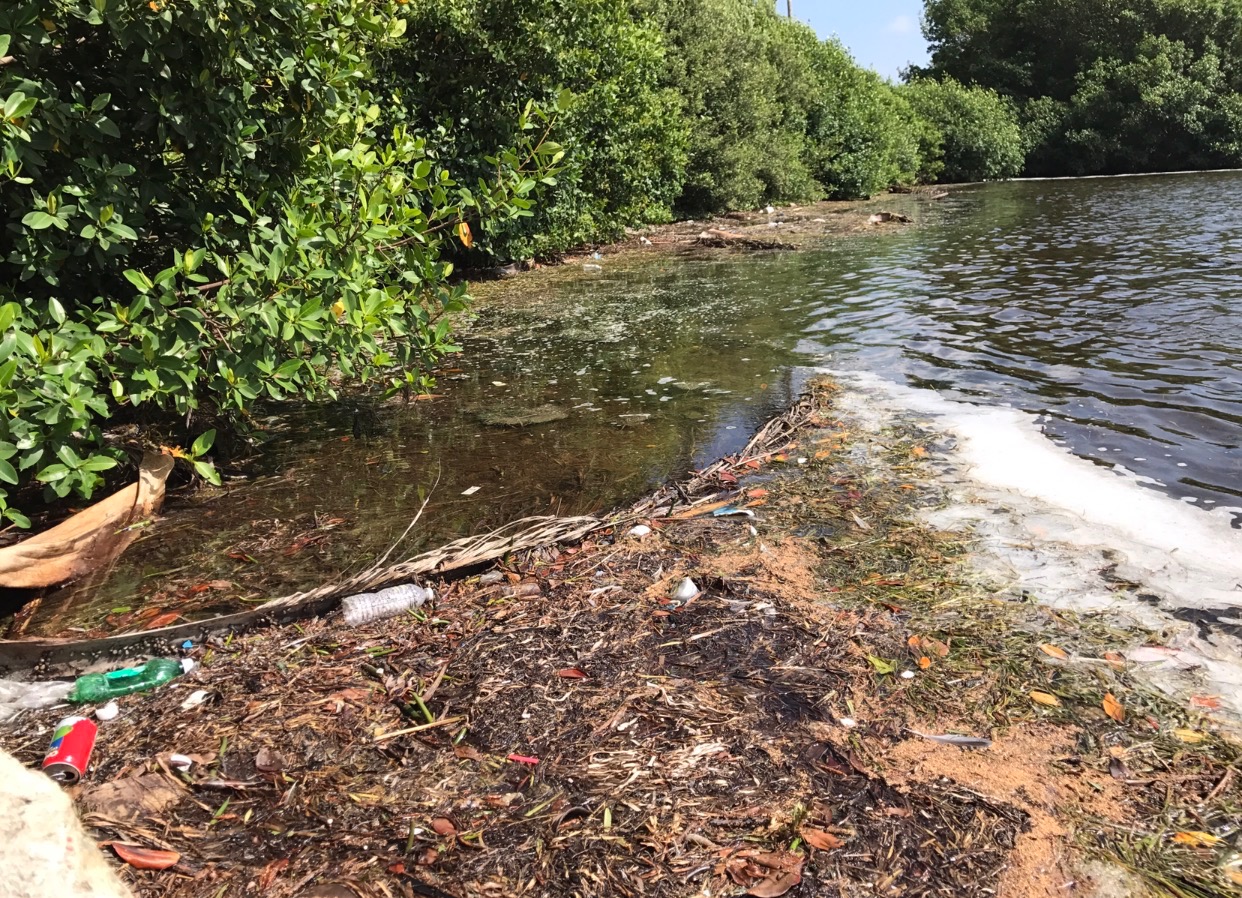 Marine debris trapped near mangroves at Deering Estate in Miami

Human throwaway culture has resulted in exploitation of the world’s natural resources to produce products for people to buy and eventually throw away. Many of these products end up as marine debris. In order to reverse such trends, people must learn to reduce consumption, reuse, and recycle whenever possible. Market incentives should be created to allow industry to create mechanisms to facilitate reutilization of resources – benefiting both the economy and the environment. Despite the emerging Anthropocene, it is important to be conscious of our community, a community that has a right to continued existence with other organisms. We must educate one another about these issues to ensure a cleaner and safer world for humanity, wildlife, and our oceans. If we can be more environmentally conscious and depart from the throwaway culture, we will help prevent and reduce marine debris.