SB 712: A Watered-Down Bill that Will Not Fix our Water Quality Issues

Governor DeSantis just signed into law SB 712 - the self-proclaimed “Clean Waterways Act” - an ambitious misnomer for a bill that claims to be the solution to our mounting water quality issues, but falls far short of that mark.

This bill has been praised by its supporters as one of the most environmentally progressive pieces of legislation in over a decade. But looking back at the cuts and rollbacks that our environmental regulations were subjected to under the last state administration, that really isn’t saying much. At 111 pages, the bill largely pays lip service to most of Florida’s major sources of pollution, but lacks the specificity and enforceability to actually solve any of the problems.

Proponents of the bill claim that it implements recommendations of the Blue Green Algae Task Force, but even those common sense, albeit vague recommendations will not be nearly achieved through the implementation of SB 712. For example, the Task Force recommended that projected changes in demographics, land use, and hydrology should be incorporated into the BMAP process. 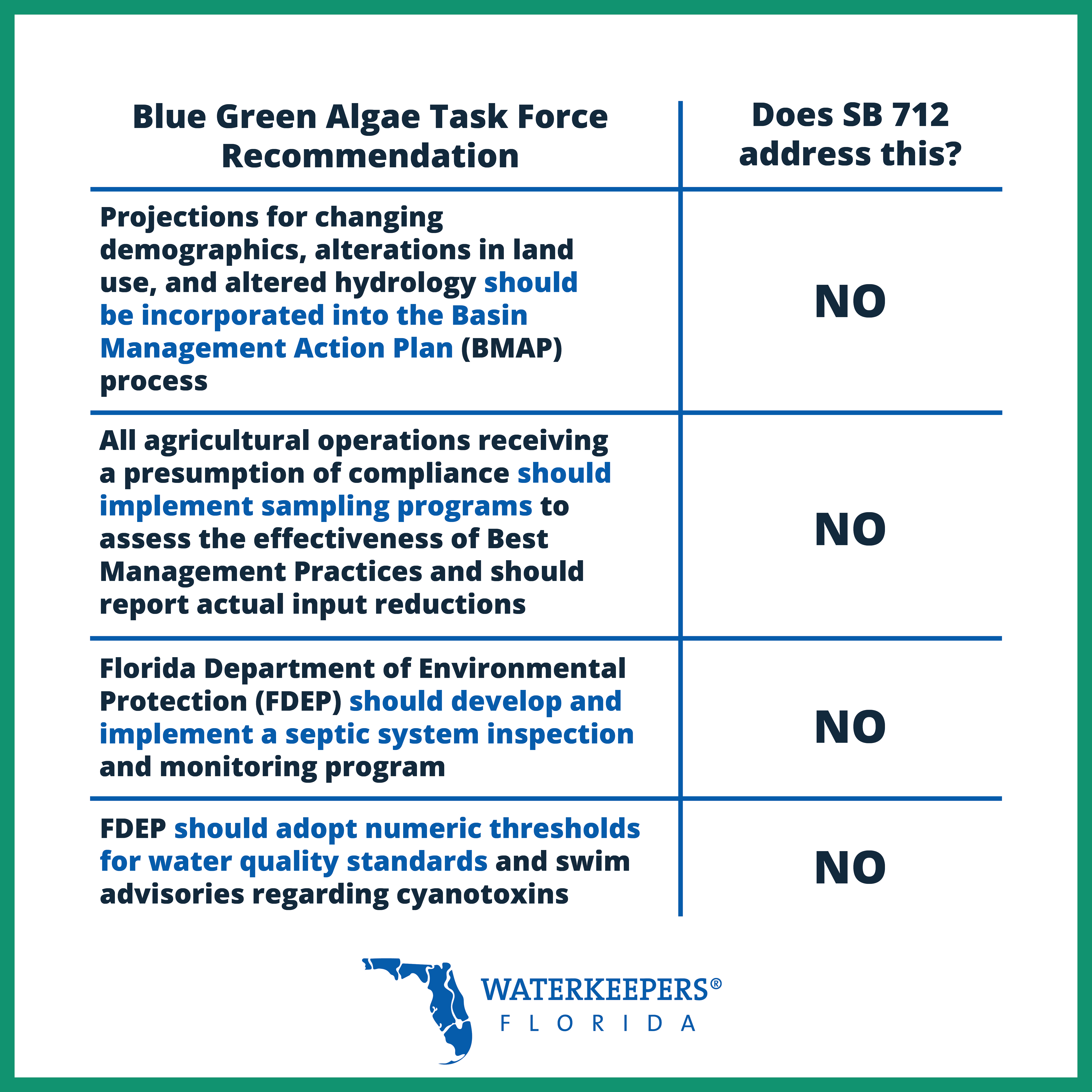 Think about it. We have 1,000 people moving to our state every day. That means that over the 20-year life of a BMAP, millions of people will have made their homes here and added additional strain to our already-stressed natural resources. In order for a BMAP to be successful, it needs to anticipate these changes and incorporate a plan to deal with them, otherwise it is destined to fail. Unfortunately, SB 712 ignores the common sense recommendations and doubles down on the ineffective BMAP system that has resulted in the water quality crisis that we are in today.

Furthermore, the bill fails to meaningfully address one of the largest sources of nutrient pollution in our state: agriculture. The Task Force recommended that the effectiveness of BMPs should be supported by adequate data to justify the presumption of compliance with water quality standards, but SB 712 only increased monitoring for current BMPs that have proven to be ineffective at curbing water quality pollution.

With regard to public health, the Task Force recommended that FDEP establish defensible health advisories and water quality criteria for cyanotoxins and that DOH should work with FDEP to implement a communication plan to inform the public about the potential health risks associated with exposure to toxic algae. Despite the harmful algae blooms that have already begun to plague our waterways this summer and the inconsistent and ineffective signage to warn users of their danger, this was not addressed by SB 712 either.

Supporters of the bill laud the initiation of rulemaking to address things like septic systems, biosolids, and stormwater systems, but when it comes to environmental rules, the devil is in the details. The effectiveness of these provisions will rely entirely on the specifics of the rules as they are drafted and will only matter if they are actually adopted. Top this off with flashy grant programs (subject to appropriations) that, based on the legislature’s track record of underfunding conservation programs, may never come (see Florida Forever), COVID-19 budget deficits, and reports and studies that will kick the can down the road for another 10 years, and you have a bill that hardly deserves the title “Clean Waterways Act.”

If that weren’t bad enough, a late-stage amendment added a provision that would preempt local governments from passing Rights of Nature regulations, a growing international movement that recognizes species and ecosystems as entities with rights of their own that could be protected in a court of law.

Despite months of advocacy and proposed amendments by Waterkeepers Florida, Sierra Club, and Florida Springs Council, SB 712, in its final form, falls far short of the measures needed to halt and reverse the decline of our state’s waterways.

We no longer have the luxury of taking incremental steps to try to address our water quality issues. We need strong, enforceable, science-based regulations that protect our waters now. SB 712 does not do that.

Submitted on behalf of Waterkeepers Florida

Waterkeepers Florida is a regional entity composed of all 13 Waterkeeper organizations working in the State of Florida to protect and restore our water resources across over 45,000 square miles of watershed, which is home to over 15 million Floridians. For more information visit: www.WaterkeepersFlorida.org