Septic system vulnerability has become pressing news in South Florida, in light of climate change and sea level rise. Rising sea levels are elevating the water table, limiting the amount of dry space for the effluent to percolate down through the soil -- where it is naturally filtered, sanitized, and harmful contaminants from raw sewage are removed. When not properly cared for, septic tanks can become a land-based source of pollution for our waterways because raw sewage can leak into canals and watershed. This pollution can seep further into our underground drinking water supply in our aquifer. 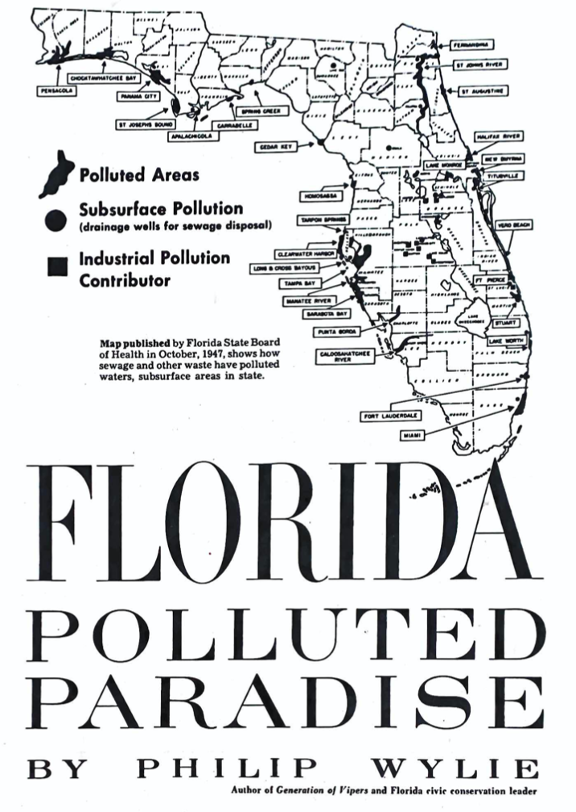 Miami Waterkeeper works towards educating the public on the importance of proper septic maintenance and consideration of conversion to municipal sewage lines. While researching the history behind the 1971 Miami-Dade County (MDC) ordinance, requiring all properties on septic tanks to connect to the sewer system where available (Chapter 32, Sections 32-76 to 32-82), we came across a 1949 article in Look magazine titled, “Florida Polluted Paradise,” by Philip Wylie, author of Generation of Vipers and Florida conservation leader.

“Modern sewage systems are the exception rather than the rule in Florida. It is a region of privies and septic tanks - and worse.” - Philip Wylie, 1949

Wylie addresses the concern on septic vulnerability over 70 years ago. Yet, this article could have been written today, shedding light on the exact same environmental concerns. This 7-page spread illustrates Florida’s paradoxical paradise, where much of the coastal state is not as clean and pristine as it seems. Wylie further emphasizes a stark correlation between coastal contamination and increased health concerns. Septic system failure complicated with slum and blighted areas, low lying land, political oblivion, and inability to enact stringent rules and regulations on septic maintenance, are covered at length.

Clean water, beautiful beaches, flourishing ecosystems, and a subtropical climate have all incentivized tourism to the state for several years. South Florida’s economy is significantly influenced by tourism revenue -- which is dependent on the state’s attractive coastal resources. Wylie’s article illustrates that we have been dealing with septic system failure and sanitary sewer overflows (SSOs) for several years. Yet despite the ecological turmoil, major infrastructural change has yet to occur.

“During heavy rains… shallow lakes which form on lawns and streets are therefore contaminated by raw sewage... clear, blue bays that once characterized the peninsula have become an opaque grey-green.”  - Philip Wylie, (Source: Look Magazine, 1949)

Fast forward to the year 2020, our Bay and watershed continue to combat issues associated with nutrient contamination. Despite the 1970 ordinance noted above, and 70+ years of foreknowledge, there still are over 120,000 septic tanks in MDC which threaten the future of our Bay. According to a 2018 MDC report, over 58% are now vulnerable to compromise due to sea level rise. Read the full report HERE. 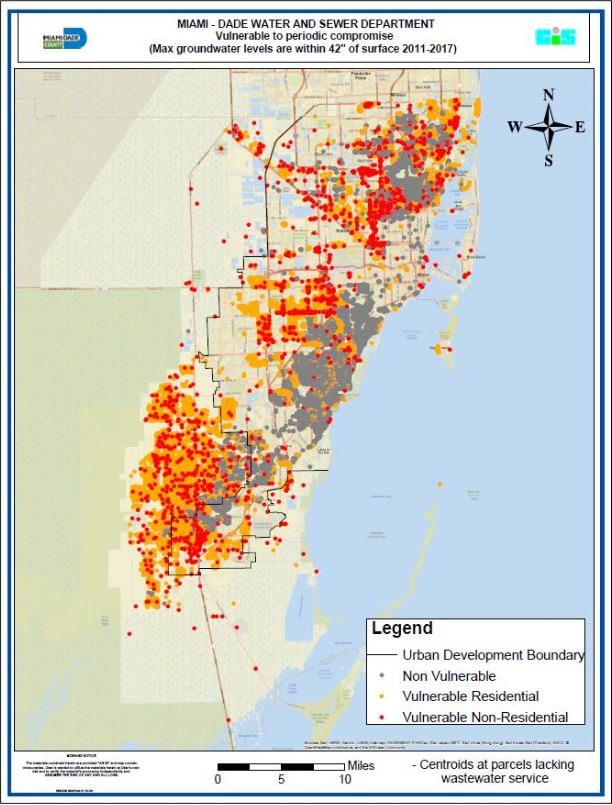 Connecting all properties to sewage lines is over a $3 billion feat -- requiring funding from the local and federal governments. While this won’t be an overnight fix, MDC must work diligently to protect our resources. Until we reach this goal, Miami Waterkeeper suggests some best management practices to keep your septic system properly maintained to prevent leaks and contamination:

Even though studies predict heightened system failure in the next 20 years, it is evident that that has been an ongoing issue for several years. Moving forward, governmental bodies must establish strict regulations that are environmentally sound, and practice interagency collaboration to best strategize for the future -- creating a sea-level rise ready South Florida. Researchers, universities, municipal governments, non-governmental organizations, and federal agencies should continue to exert extensive efforts to strategize on this septic issue.