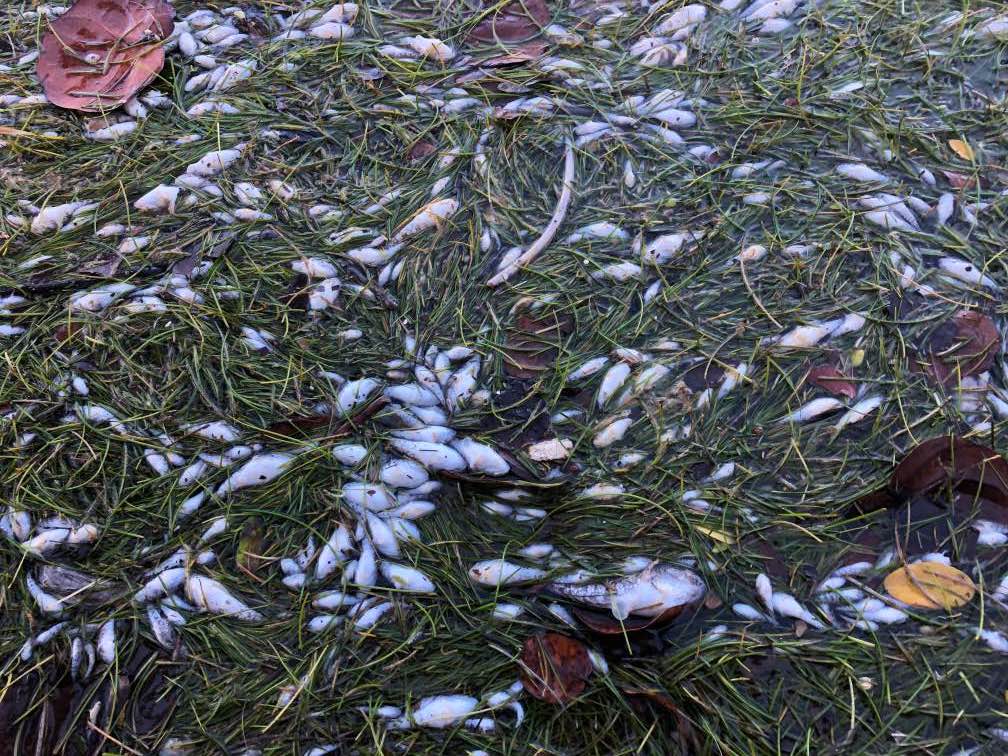 The kill seems to have an epicenter near Morningside Park, but dead fish have been seen from North Miami to Virginia Key. We notified the proper agencies and are sending water samples to FWC to check for harmful algae bloom toxins. Many species of fish were killed, including pufferfish, toadfish, eels, shrimp, trunkfish, pinfish, lizardfish, hogchoker, and more.

On August 12, 2020, Pelican Harbor Seabird Station reported an aggregation of rays nearshore. Scientists believe that this aggregation may be due to low oxygen levels in the water, making it hard for the rays to breathe. Agencies are working on a rapid response to avoid a ray die-off in this area. View the video here. 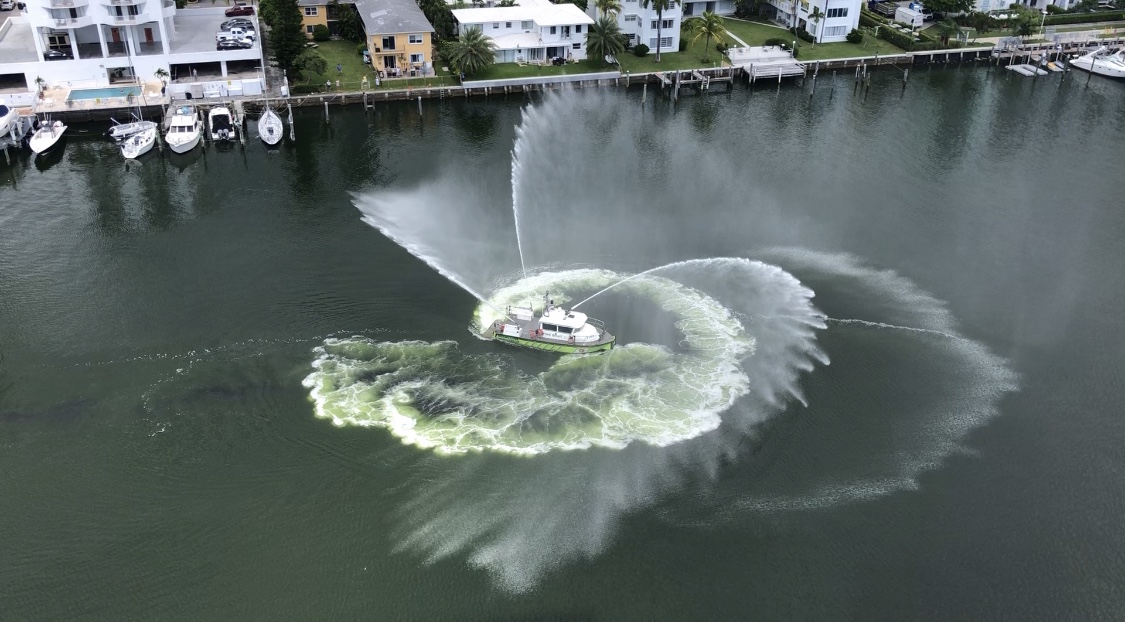 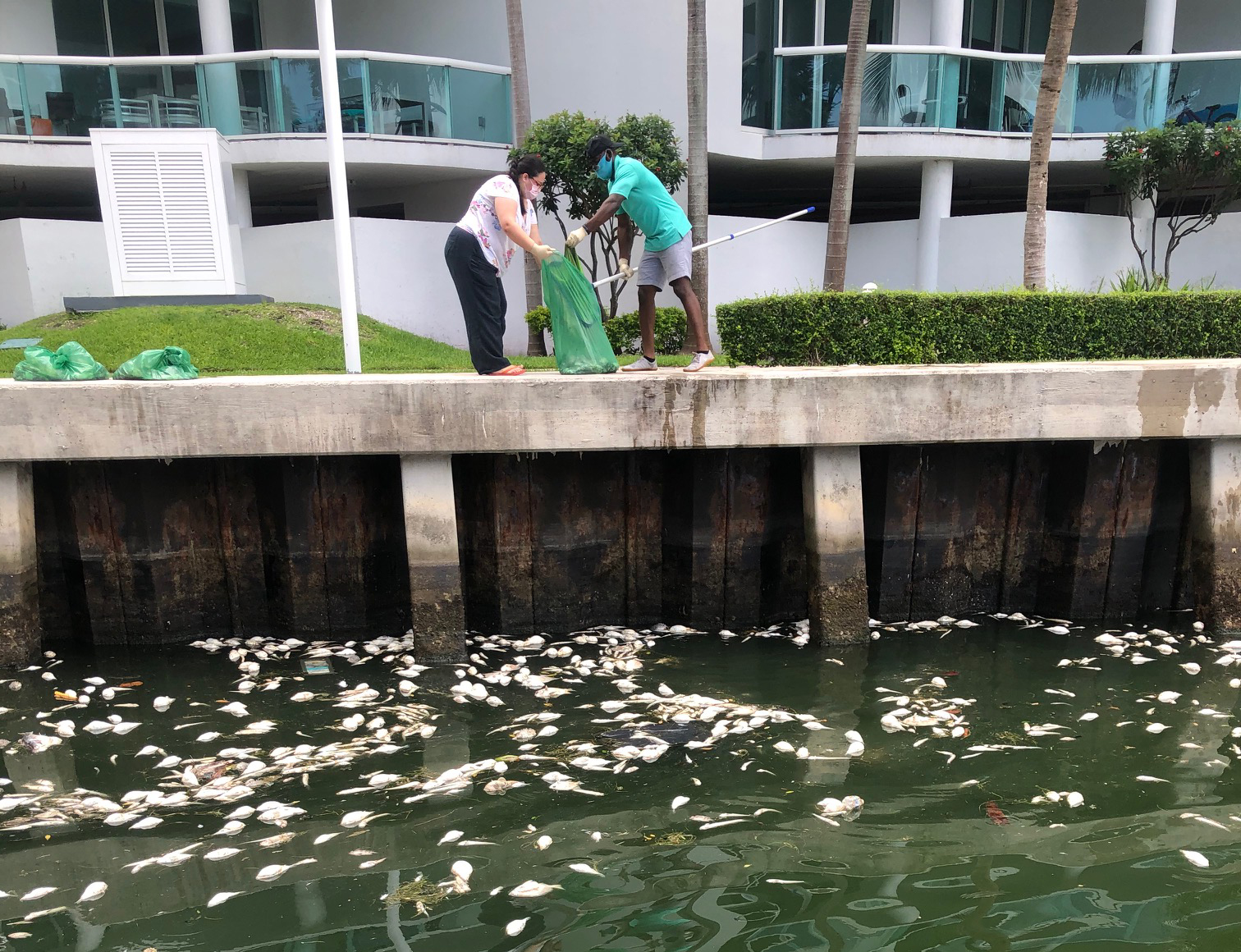 Conditions appeared to be improving by mid-week. However, by August 20, 2020 residents began to report incidents of strange foam accumulating at the water's surface. This foam was white in nature and also changed color to brown. By August 21, 2020, we began to receive reports of sweeping amounts of foam across Biscayne Bay and by late in the day -- we determined that many areas of the Bay and adjoining canals and waterways were already experiencing algae bloom events. Algae blooms appear to be concentrated in the North Bay area between the Broad Causeway and the 79th Street Causeway. Miami Waterkeeper has been coordinating responses to this algae bloom event with scientists and officials from FIU, UM, NOAA, FDEP, Miami Dade County DERM, City of Miami, North Bay Village, Miami Shores, and the City of Miami Beach.

This fish kill is likely caused by a low dissolved oxygen (DO) event, although we are still investigating. Dissolved Oxygen is the amount of oxygen available for all life in the water, both plants, and animals. DO levels are one of the key indicators of how healthy a body of water is. Low DO levels are a common cause of fish kills, especially in the summer when water is very warm and possibly also polluted. Fish and plants essentially “suffocate” without enough oxygen to breathe in the water.

Algae blooms can lead to low oxygen conditions, which is why we have been working to stop algae growth and decrease nutrient pollution in Biscayne Bay. These blooms can be caused by too many nutrients like phosphorus and nitrogen in the water. Nutrients such as these can be found in sewage, septic tank effluent, fertilizers, pet waste, and stormwater runoff.

Scientists have been warning about this for years. In August 2019, scientists released a study that reviewed 20 years of data and found that Biscayne Bay is facing a regime change. This means that the bay is changing from a seagrass dominated ecosystem to an algae dominated one. This can be difficult -- if not impossible -- to reverse. We have already seen some initial changes in the Bay including a loss of 21 square miles of seagrass. In some areas, 80-90% of the seagrass has already disappeared.

Algae blooms happen when there are too many "nutrients" like nitrogen and phosphorus in the water. These nutrients can fuel algae in the water to bloom and can lead to the reduction of water clarity, fish die-offs, human health risks, and the loss of biodiversity.

Scientists believe that land-based sources of pollution are a large contributor to this problem. Such sources include stormwater runoff which contains nutrients from sewage, septic tanks, fertilizer, and other contaminants or chemicals.

This event is not a “normal occurrence,” but rather a sign that something is seriously out of balance in our Bay. It can be recognized as a “symptom” of high levels of pollution in our water. This fish kill is particularly alarming because of where it occurred. These kills can sometimes happen during the summer in canals that don’t have a lot of water circulation, but to see this over a large area in the open Bay is exceptionally concerning and unusual.

The types of fish that were killed include those that live at the bottom in the seagrass, which are generally less able to escape poor water quality conditions and those that live in the water column that would typically be able to swim away from poor water conditions. This finding means that the affected area was so big that these water column fish could not escape.

Algae blooms are not normal. They are a symptom of a larger pollution problem facing Biscayne Bay.

The area where the seagrass has been dying the most is the same area where the fish kill has been observed, and now where this bloom is now taking place. This is not a coincidence.  This area has many canals drain here, and which pick up the pollution from the land.  This area is highly urbanized and surrounded by septic tanks that leech bacteria and nutrients into the waterways.  Septic tanks must be removed from this area immediately.

What is Miami Waterkeeper doing to help? 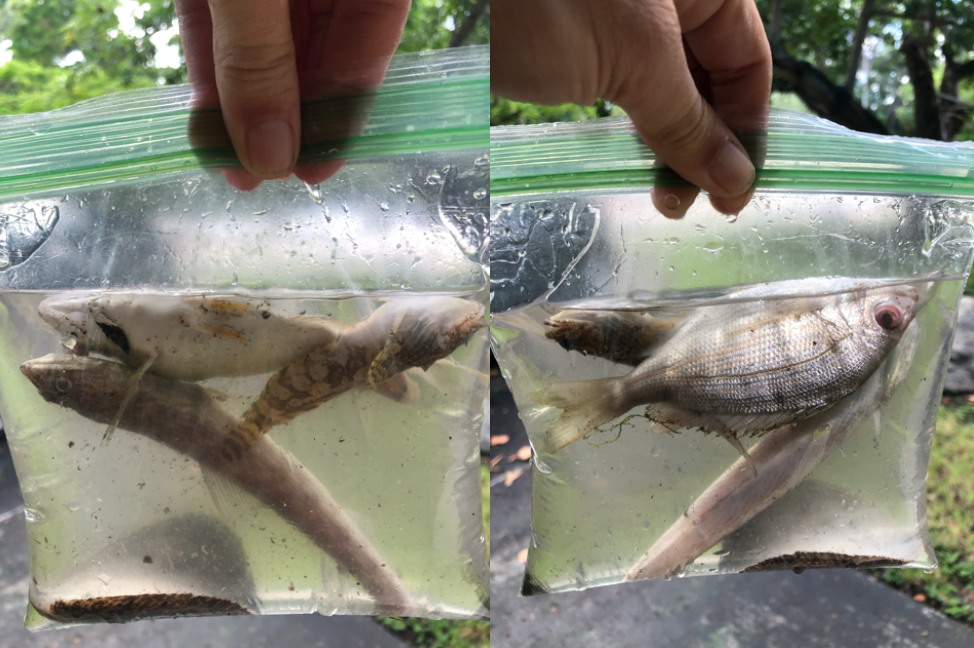 When you can to do help:

We must restore water quality through limiting nutrient pollution into Biscayne Bay. Here's how:

Click HERE for a downloadable list of Summarized Policy Action Items to consider as an elected official supporting the current and future health of our Bay. 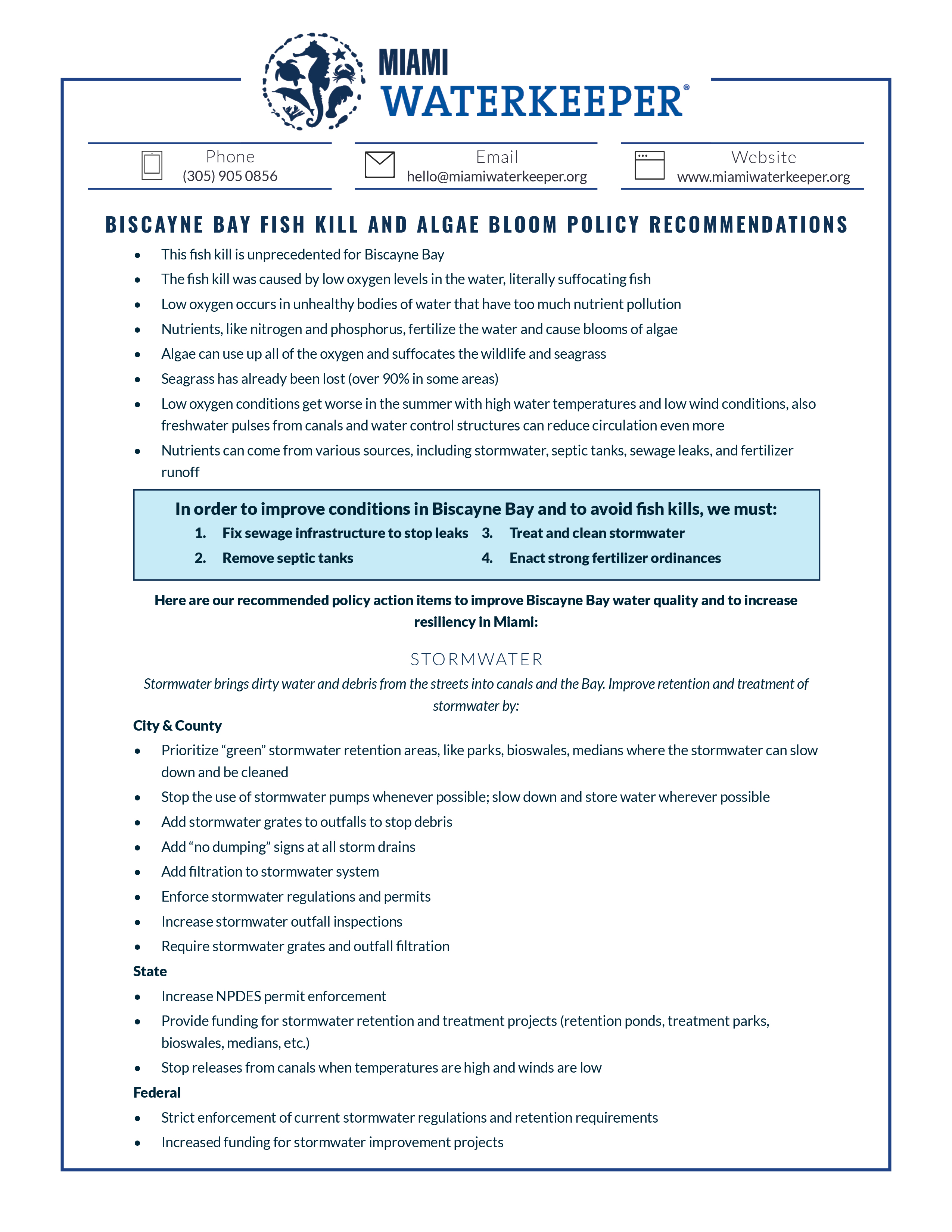 What can you do to reduce pollution entering our waterways?

Learn more about how to reduce your pollution impact HERE and support our work by becoming a Miami Waterkeeper member HERE.