Miami Waterkeeper conducted a comparative analysis of the 2018 and 2020 report to attempt to reconcile the differences. Here’s what we found… 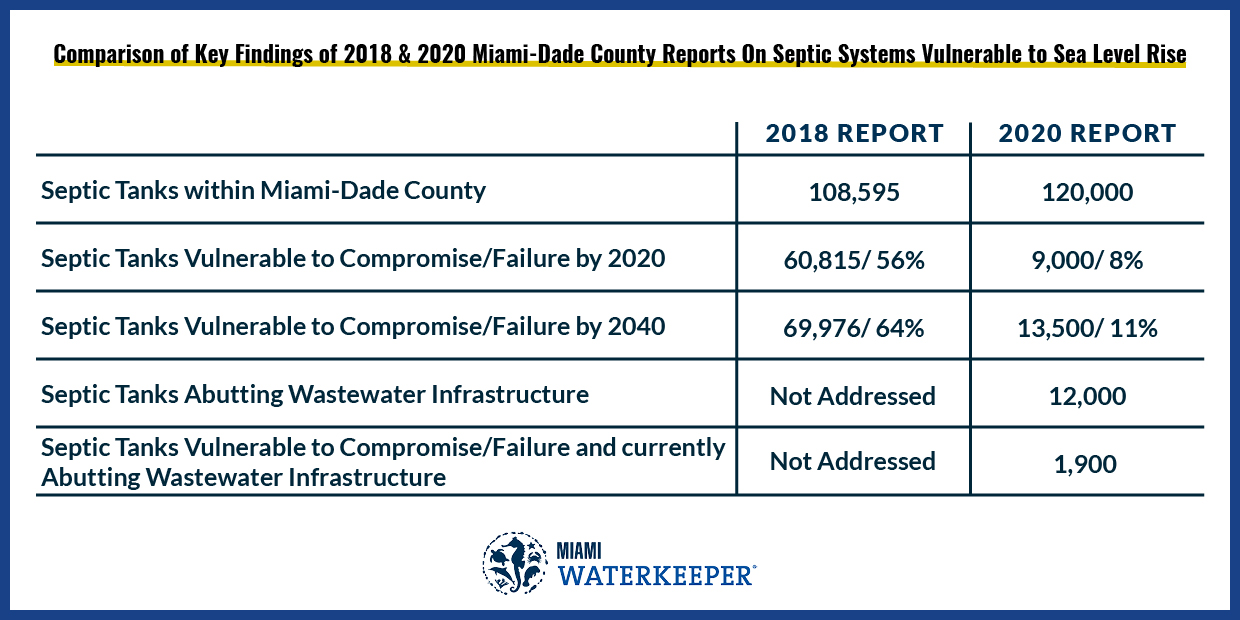 The 2018 report reviewed historical precipitation data from 1996-2010 to identify septic systems that would fail or be compromised periodically due to high groundwater levels caused by these significant major rain events. The report acknowledges that these conditions will only occur periodically during heavy storms or wet years, but states that “[f]rom a public health perspective, failure for even a few days a year can present a significant risk (pg. 34).”  The 2018 Report identified 58,349 septic systems that were periodically vulnerable to compromise under current conditions and 67,234 under projected sea level rise (SLR) conditions in 2040.

In contrast, the 2020 report chose not to include as vulnerable any septic systems that would only be “periodically” vulnerable and only included those septic systems that were “persistently” vulnerable during “average October groundwater conditions.” The 2020 report justifies its approach of excluding data from periodically occurring heavy storms by stating that “[w]hile the use of this rare rain event was helpful in establishing a minimum threshold for vulnerability, it is not the most appropriate standard for planning sewer expansion or other mitigation due to limited funding resources (pg. 6).”  As a result, the 2020 report only identified 9,000 septic tanks that were currently persistently vulnerable and 13,500 that were projected to be persistently vulnerable in 2040.

Key Takeaway: There is a significant decrease in the total number of septic tanks that are considered vulnerable to compromise/failure from the 2018 report to the 2020 report. This is because the 2020 Report only uses the average October groundwater conditions during the 15-year period of 1996-2010. The 2018 report relied on groundwater levels following the highest rain events occurring in the 15-year period. That is, the 2018 report identified septic systems that would be compromised "periodically" due to high groundwater levels caused by significant major rain events, while the 2020 report only identified those septic systems that were “persistently” vulnerable during “average October groundwater conditions.”

It should also be noted that the 2020 report does not appear to consider the fact that scientists predict that climate change will increase the frequency of heavy storms in Miami Dade County.

Septic systems on properties that immediately abut existing sewer infrastructure are considered the easiest to convert from septic to sewer for waste disposal. The 2018 report did not identify nor discuss septic systems located on parcels that currently abut sanitary sewer lines.

The 2020 report states that there are approximately 12,000 properties in MDC with septic tanks that abut sewer lines. The report acknowledges that “[t]hese are considered to be the “low hanging” fruit, for which connection to sanitary sewer is most immediately feasible (pg. 12).” The 2020 report also estimates that of the 9,000 septic tanks persistently vulnerable, there are 1,900 that are located on parcels that abut sewer lines and should be prioritized for conversion to sewer.

Key Takeaway: According to the 2020 report, at least 1,900 properties in Miami Dade County have septic tanks that are persistently vulnerable and immediately abut existing sewer infrastructure. Were the 2018 groundwater levels contemplated in this analysis, this number could be much higher.

Key shortfalls of the 2020 report:

Second, this report seems to focus only on groundwater level as an indicator of septic tanks that are vulnerable to failure. This assumption ignores that there are several variables which contribute to septic tank failure in South Florida.

Studies have consistently shown that there are four reasons why septic tank systems are prone to failure in South Florida – (1) elevated groundwater levels; (2) frequent flood events; (3) porous limestone substrata; and (4) overly dense concentrations of septic tanks in urban areas.  By ignoring three of the four variables, the 2020 report severely underestimates the magnitude of the problem of Miami Dade County’s 120,000 septic tanks.

Finally, the report fails to consider the intrinsic problem of having 120,000 septic tanks in MDC’s watershed. Septic tanks do not function in South Florida and permitting any number of them to persist presents a threat to both environmental and public health.